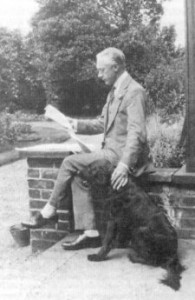 Robinson was a student of F. Matthias Alexander, pictured above in a photo taken by Marjorie Barstow

“If we have stumbled up on to our hind-legs from quadrupedal ancestry, that alone might readily account for certain very common strains and expensive postures. But granting that, during the hundreds of thousands of years which mankind probably lived as a hunting animal, wandering through the forests and across the plains, he attained a proper adjustment without taking thought, this is no sign that, now that he works in factories and leans over desks and counters, he had hit upon the right attitude, and is not wearing himself out by entirely needless exertion.

“Those of us who are conspicuously slovenly in our carriage are urged by parents, teachers, and friends to ‘brace up.’ I have given myself this order and received it from others since childhood, but have found that my best efforts failed. Now I see the reason. No one explained to me what is was to ‘brace up,’ and I assumed that an effort to elevate my chest, buckle in my back, and bring my shoulder-blades as nearly together as possible was the desired end. This is what most people do when they endeavor to straighten themselves.
“While there might be worse positions, this one involves a great deal of strain; it tends to throw out the abdomen and does not really increase the freedom of the lungs. It is usually accompanied by a throwing back of the head, so that we really shorten rather than lengthen the body; for the kink in the neck and the inward bending of the spine at the waist produce a reduction in our possible stature.
“Mr. Alexander (F. Matthias Alexander) depreciates the military carriage on the grounds just given. If the resting Hermes in the Neapolitan Museum should jump to his feet and continue his way, our initial astonishment would be perceptibly increased if he assumed the attitude of a West Point cadet. The horsemen of the Parthenon frieze and the entrancing mounted Amazon ride rather more like cowboys than like hussars. This proves only that the Greek sculptors would probably have no inclination to dispute Mr. Alexander’s contentions.”
(F. Matthias Alexander was the developer of what we know today as the Alexander Technique)
***
James Harvey Robinson was an American economist and historian and one of the founders of the New School for Social Research in New York City. F. Matthias Alexander was the developer of what today is called the Alexander Technique